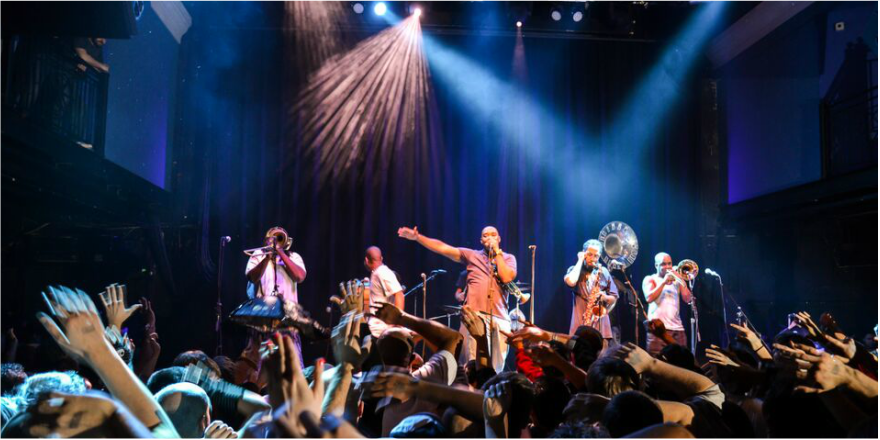 8:30pm - 10pm at the MISSION STAGE (MAIN STAGE) of the SLO JAZZ FESTIVAL MAY 14, 2016
The Grammy Award winning and World-renowned Brass Band out of New Orleans is headlining the SLO Jazz Festival.

"just saw THE REBIRTH BRASS BAND, unbelievable. hard as hell, free as a ray of light, there is not a band on earth that is better. stunning." -- Flea, Red Hot Chili Peppers

The Grammy Award​ winning NOLA soundtrack straight from the streets of ​ Treme.

Rebirth Brass Band have continued their innovative, contemporary approach to New Orleans music following up 2012’s
The Grammy Award​ winning album ​Rebirth of New Orleans​ with 2014’s ​ Move Your Body​  which was released on Basin
Street Records this past June. Since its release, the record hit #1and has been at the top of both the CMJ & Jazz Week
Radio charts. Whether seen on ​ HBO’s​ ​Treme​  or at their legendary Tuesday night gig at The Maple Leaf, Rebirth Brass
Band is a true New Orleans institution. Formed in 1983 by the Frazier brothers, the band has evolved from playing the
streets of the French Quarter to playing festivals and stages all over the world. While commited to upholding the tradition
of brass bands, they also extended into the realms of funk and hip​ hop to create their signature soul moving sound. Their
signature brand of heavy funk has not only won over several generations of music lovers, it has become the soundtrack to
an entire city.
“Rebirth can be precise whenever it wants to,” says The New York Times, “but it’s more like a party than a machine. It’s a working model of the New Orleans musical ethos: as long as everybody knows what they’re doing, anyone can cut loose.” In the wake of the sometimes- stringent competition amongst New Orleans brass bands, Rebirth is the undisputed leader of the pack, and they show no signs of slowing down.